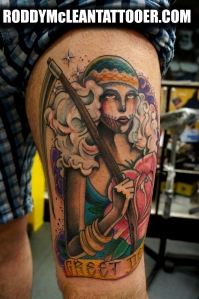 In the shop ive tried hard to make a functional and inspiring place to work in and be tattooed in, (only today a customer was gazing at the reflection of a sharps bin in the chrome paint drips and decided to mimic the orange to yellow colour fade in his Tattoo..)

In my workspace at home its a starker leaner enviroment but …..

,whores will have their Trinkets…heres some of mine

My Drawing desk with old business cards on it 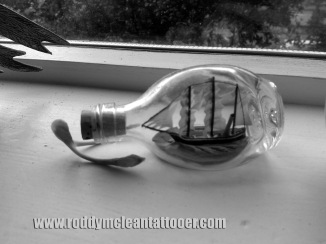 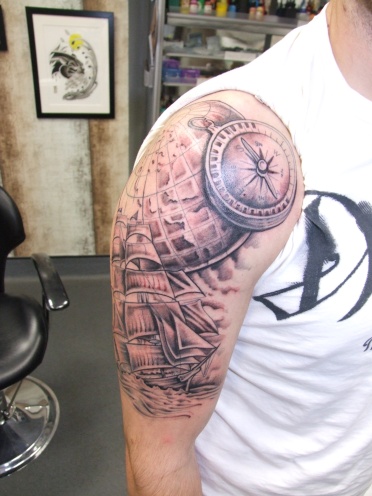 The shop has survived on its good reputation in the sleepy Dowanhill Street just of Byres Road in the West end of Glasgow with Steven Wrigley knocking out 1st class tattoos since he left  his father Terrys shop and opened Irezumi in the late 1990’s,

the shop is known for its Japanese style work and Traditional Tattoos ,its hard to explain the impact of seeing Stevens work around in Glasgow and the photos of large scale colorwork that adorned the walls of the shop on my first few visits If you pick up a tattoo magazine from around this era it’s not too hard too see why it blew me away,

heres all the work i have had done at irezumi so far, i plan to complete my bodysuit there as a testament to the eye opening affect it had on me then an now and its influence on my own Tattoo Career. 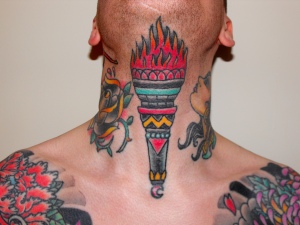 you can find Steven Wrigley and Stephen Kelly there tues to sat if you fancy gettin yourself a piece of Glasgows Tatttooing Legacy,

Been doing so much black and grey these days i got inspired by the cholo script post of yesterday so i knocked out a flash sheet 1st of six drawn straight on no reference, these should be ready for the summer proper,hopefully put an end to the ten year old Boog flash in my shop,

to buy my flash go to